The City has sent out notices to all Boston Eversource customers and is hosting informational webinars in ten different languages, ASL, and CART

Mayor Martin J. Walsh today announced a series of milestones in the development of the City of Boston’s  Community Choice Electricity (CCE) program, which allows the City to leverage the collective buying power of Boston’s homes and businesses to secure more stable and affordable electricity rates, and more clean power. A key strategy in the City’s Climate Action Plan to lower emissions and achieve carbon neutrality by 2050, the program will officially launch February 1, 2021 and will be the largest municipal aggregation program in New England. 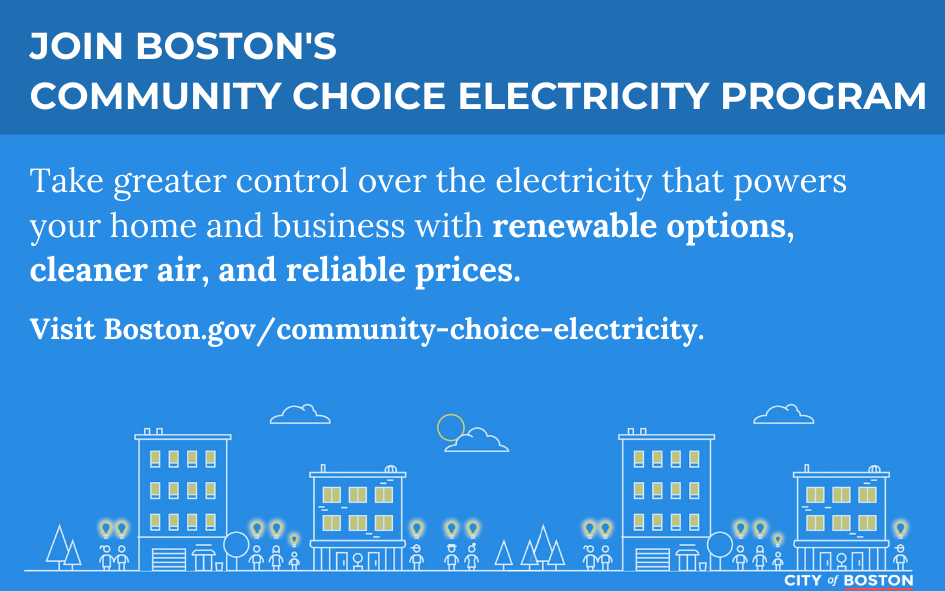 “Community Choice Electricity is integral to how we, as a community and as individuals, can act on climate change now. This program will help us make the best decisions possible for all residents, deliver on our commitment to clean energy, and put Boston’s energy future in our hands,” said Mayor Walsh. “Boston is already one of the most energy efficient cities in the United States, and the start of the Community Choice Electricity program is an important step in helping us reach our ultimate goal of carbon neutrality by 2050.”

The City of Boston has contracted with Constellation NewEnergy, Inc. as the supplier, and will offer three product options for customers: Optional Basic, Standard Product, and Optional Green 100. Designed as an opt-out program, CCE offers customers flexibility in their electricity choices without any change in delivery or any contractual commitments. The City of Boston will begin sending notices to residents on Eversource Basic Service tomorrow. Those residents will be automatically enrolled in the program unless they actively choose opt out.

Beginning Monday, December 14, the Environment Department will host a series of 11 webinars for residents and businesses that will cover how the program works, customer benefits, electric rates and renewable energy offered, key features, and what to expect over the next few months as the program launches. Staff will be available to answer all questions on the program and provide attendees with resources on protecting their electric accounts.

“As Chair of Boston City Council’s Committee on Environment, Resiliency, and Parks, I am thrilled that Community Choice Electricity will be implemented to decrease Boston’s carbon emissions and combat climate change,” said City Councilor Matt O’Malley. “I am grateful for all of the community advocates for their efforts in helping make this program a reality.”

“The Boston Climate Action Network (BCAN) is delighted that Boston’s CCE program will ensure access to cleaner, more renewable electricity for all city residents. Getting an additional 10% Class 1 renewables without raising costs is a climate achievement equivalent to taking over 13,000 cars off the road. There is a lot of work to be done, but this is a big step toward becoming a carbon neutral city,” said Andy Wells-Bean, Campaign Coordinator, BCAN.

One of the key advantages of Boston’s CCE program is the opportunity to provide over 20,000 low-income customers meaningful discounts on their electricity costs through the Commonwealth of Massachusetts’ Solar Massachusetts Renewable Target (SMART) Program. The City of Boston has partnered with NextGrid Inc. which will build 100 megawatts (MW) of new solar PV modules within Massachusetts. When completed, the incentives from the new solar projects will result in an estimated $72 annual savings for the average low-income household, and more than $28 million over 20 years. The City is seeking to contract with other developers for more solar energy capacity to increase low-income customer savings and spur job creation.

“I commend the City of Boston for their innovation in capitalizing on the Administration’s solar incentive program through the proposed Community Choice Electricity program to reduce energy bills for low-income residents,” said Energy and Environmental Affairs Secretary Kathleen Theoharides. “The City of Boston is an important partner for the Administration as we work to address climate change and meet our net zero emissions commitment while growing the economy and keeping energy costs low for residents.”

“NextGrid is thrilled to partner with the City of Boston and Colonial Power Group to bring clean, discounted electricity to the low-income, Energy Assistance residents participating in the City’s Community Choice Electricity Program. The City is setting an example of climate leadership through the largest procurement of discounted clean power for low-income residents in the U.S. to date,” said Aaron Culig, President, NextGrid Inc.

The implementation of CCE is a key milestone in Boston’s Climate Action Plan, which serves as a five year roadmap to accelerate action towards achieving carbon neutrality by 2050 and preparing for the impacts of climate change. For over five years, Boston has ranked among the top two cities in the country for energy efficiency by the American Council on an Energy Efficient Economy, highlighting programs such as Renew Boston Trust, which identifies energy-saving retrofit projects in City-owned buildings. To further decrease municipal emissions, Mayor Walsh last year signed an Executive Order for all new City-owned buildings to target a Zero Net Carbon standard, and recently required that all new affordable housing construction funded by the City meet carbon neutral performance standards. In order to decarbonize large buildings, the City of Boston is developing an emissions performance standard, in which buildings will be required to meet targets that put them on track to the citywide goal of carbon neutrality by 2050.

The City is also implementing climate solutions to make Boston’s most vulnerable communities more resilient to the impacts of climate change. Climate Ready Boston and Resilient Boston Harbor are the City’s comprehensive efforts to fortify Boston’s 47-mile coastline against sea level rise and storm surges, while improving public access to the waterfront and green space. The goals are supported by Imagine Boston 2030, the first citywide plan in 50 years, that helps to ensure that climate plays a role in aspects of city planning. These actions and more have led to Mayor Walsh being recognized as a leader in climate action on a national and international scale as he was recently named the Chair of Climate Mayors. To learn more about the City of Boston’s climate and environment policies, please visit boston.gov/environment.